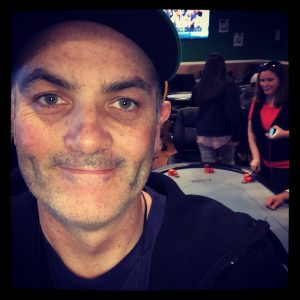 Hey y’all. It’s Ron, the only amateur on staff at the Poker Academy.com.

I made a huge mistake, and I’m hoping my pain can be your gain.

There was a local card room that was running a series of tournaments to satellite into the Main Event. They ran 18 qualifier tournaments at $100 a head. The top 3 in each qualifier got a seat into the $10k satellite. So it’s a 1 in 56 chance at $10,000.

It took me two bullets, but I finished in the top 3 and won my seat. I was in for $200, and felt like I had a better than average shot at taking this thing down. The player pool was really soft. It was mostly weekend warriors that play occasionally in $50 tournaments or $1/$3 cash games.

On the day of the $10k, I was running good and playing good. It was a very friendly structure, and I was chipping up using many of the techniques Rep talks about in the NL Tournament course. It seemed like people were playing super conservatively. I would raise in late position then c-betting most flops, and I was getting a ton of folds. I was chipping up using my chips as weapons in position and playing solid ranges out of position.

Flash forward to the final table. I was chip leader with 171,000 as the final nine drew for seats.

Here’s where the wheels started to fall off for me. Now I very easily could have folded right here. All I have is a few back door draws; it wasn’t a complete whiff, but it was pretty close.

I also could have called assuming that she whiffed too and was just doing a standard c-bet. I could see what develops on the turn and re-evaluate. Maybe another heart comes, maybe I pair my queen. A lot of good things could happen if I flat call.

So why was this such a big mistake? Because of the real world money at stake.

In this specific instance, almost all the money was up top. Second place was $1,600 and first place was $10,000. So keeping my tournament alive was of the utmost importance.

If I’m honest, I made that raise because of my ego, not because it was a sound poker decision. In fact, it might have been my only check-raise all day. I wanted to set a tone right from the get go that I was the table captain, and that this was my tournament to lose.

But I should have picked a better spot. First, I had not played with this woman at all yet. I didn’t know her style of play. Maybe she only c-bets like that when she has it? Maybe she was a pretty straight forward player, and I could have made a super easy fold if I just observed her for a few hands.

Second, I had very little equity in this hand. If the flop had been 3 & 6 of hearts and an off suit Jack, then maybe I can go with it and call her all in. I know better than to pick a total air ball hand to turn into a bluff. Especially at a final table with these circumstances. Again, if I’m honest, I didn’t spend any time thinking about what I would do if she shoved. I just thought, “surely she’ll fold if I raise here.”

And finally, I honestly believe that I had a skill advantage at this table. I was going to have the button in a few hands, and the much better strategy was to be patient, and let my skill advantage express itself in better spots.

I’m beyond disappointed with myself for punting off this opportunity.

The woman in this hand wound up winning the $10,000. I hope she crushes it at the Main Event this year.

Meanwhile, I won $438, and my Main Event Satellite dreams will have to wait another year.